The Make-Believe ABC House Is Getting Crowded 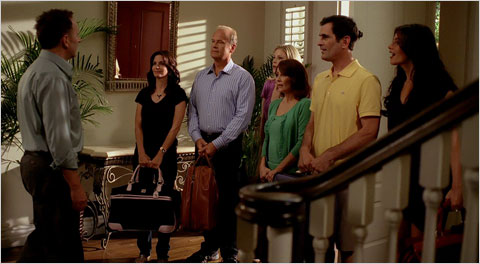 An imaginative campaign from ABC to promote its series for the 2009-10 season is being expanded.

The campaign, which began in May, is centered on the fanciful notion that the stars of all the shows broadcast by ABC live together in a house as one big happy family. Think of it as sort of a marketing spin on “Big Brother.” (Video below.)

The commercials that have appeared so far have been general in nature, featuring ABC stars like Sally Field (“Brothers and Sisters”), Teri Hatcher (“Desperate Housewives”), Matthew Fox (“Lost”) and the late-night host Jimmy Kimmel. New spots that are to begin running on Saturday, which will be available in longer versions next week on abc.com, will promote four new sitcoms that are to make their debuts on Wednesdays in the fall.

The new Wednesday series touted in the commercials are “Hank,” starring Kelsey Grammer; “The Middle,” starring Patricia Heaton; “Modern Family,” with an ensemble cast that includes Ed O’Neill; and “Cougartown,” with Courteney Cox. They are to appear from 8 to 10 on Wednesday nights.

The vignettes in the commercials include Calista Flockhart of “Brothers and Sisters” welcoming Mr. Grammer to the ABC house and showing him to his room. He offers her a tip; she tells him she is not a maid. Also, Josh Holloway of “Lost” and Ms. Cox exchange ripostes at a barbecue. And some of the newcomers are pressed into doing laundry for the casts of established ABC series like “Dancing With the Stars” and “Grey’s Anatomy.”

“We started with the people who are very familiar faces,” said Marla Provencio, co-executive vice president for marketing at ABC with Mike Benson. Now the idea is to use the premise of the ABC house to “introduce our new Wednesday comedy line-up,” she added.